It's been a looong time since I've made an update to the blog. Vacation, rebuilding the fishroom etc. took all the available time.

In april I put some Neocaridina davidi in some tubs in the garden. They survived a light frost and have been crawling around without much happening. It has been quite cold in Denmark and only recently have we experienced stable, warmer weather with most days around 20C or warmer.

I decided to have a look in the tubs yesterday...

N. davidi "Yellow Fire Neon" looked good, but no berried females. Some of them had turned green(ish). Will be exciting to follow that!

N. davidi "Topaz blue" was another story; lots of big, berried females! Some went inside the fishroom, but most stayed in the tub. 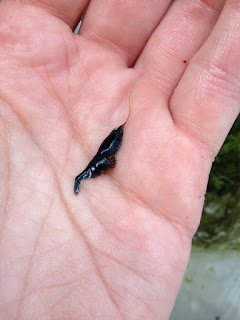 In a container for photos... 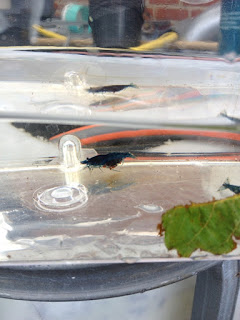 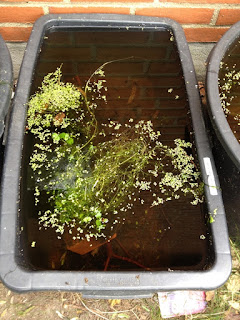 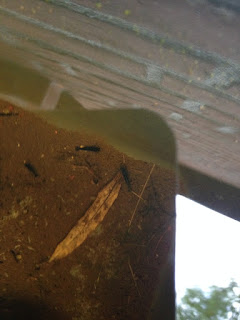 The tubs are 60-90 litres filled with tapwater. Of course rain will slowly thin it up, but with N. davidi it's not a problem; they are hardy animals.

The soil is just dug up from the garden and my son has thrown some sand in there. An old brick and some twigs we found on the way home from daycare is also enjoyed by the shrimp for grazing. The plants are from a pond nearby.

I was intending to put more shrimp outside, especially Caridinas, but time would not allow it this year. I hope to do it next year!